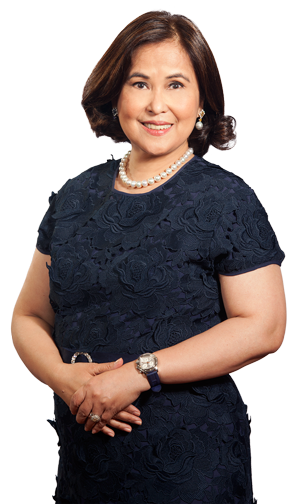 Nina D. Aguas
Executive Chairman of the Board 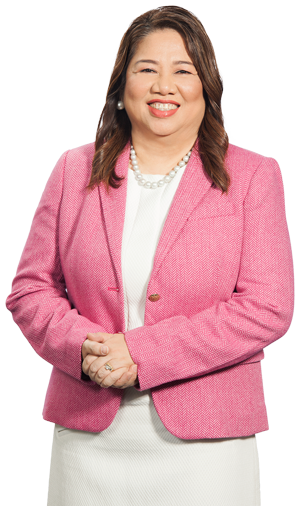 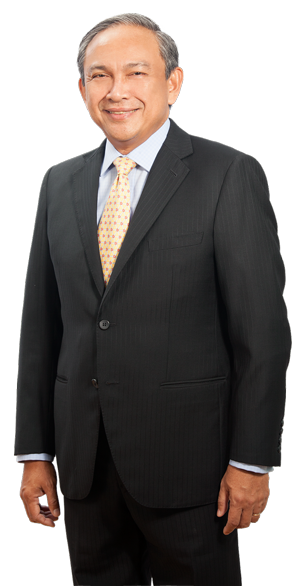 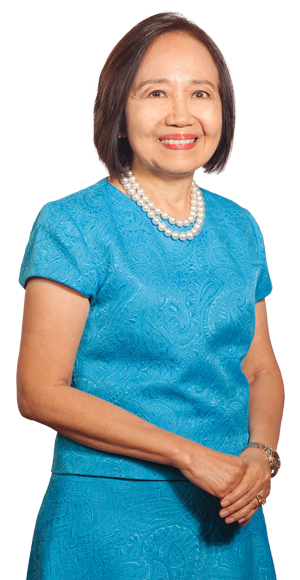 Luis C. La Ò
Vice-Chairman of the Board and Independent, Non-executive Trustee

Nina D. Aguas
Executive Chairman of the Board 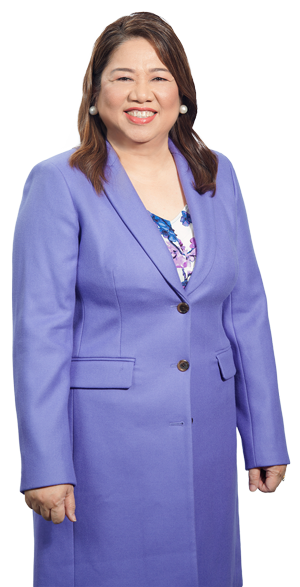 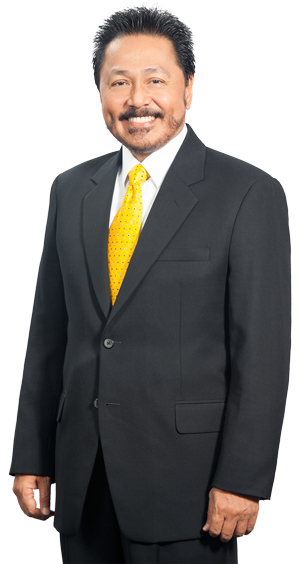 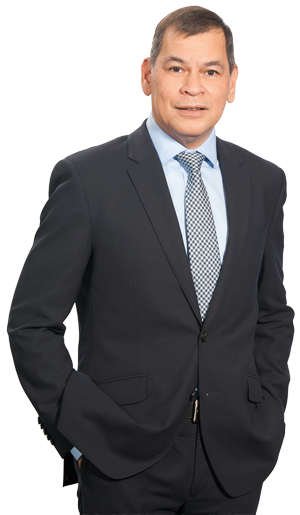 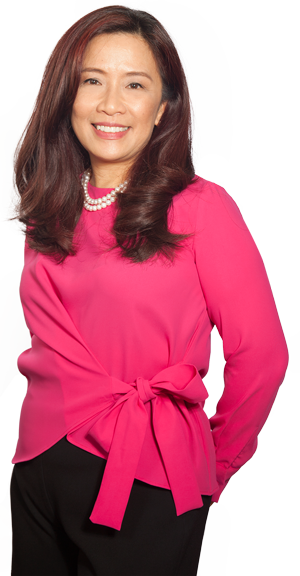 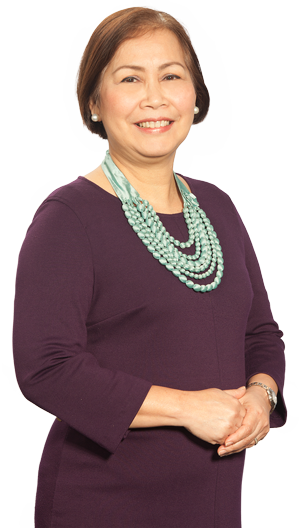 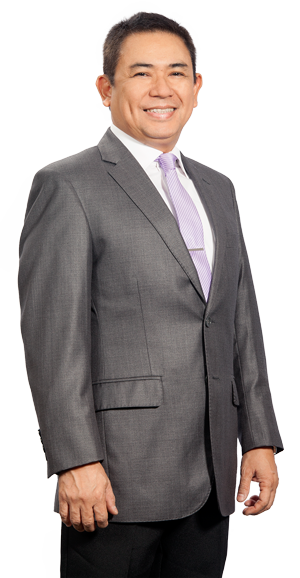 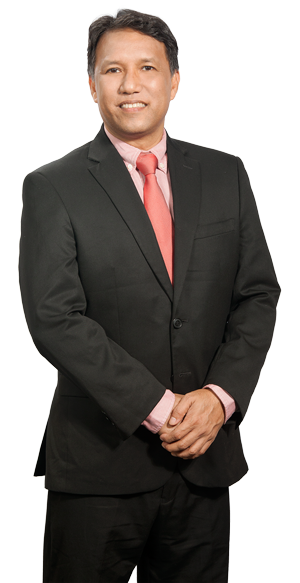 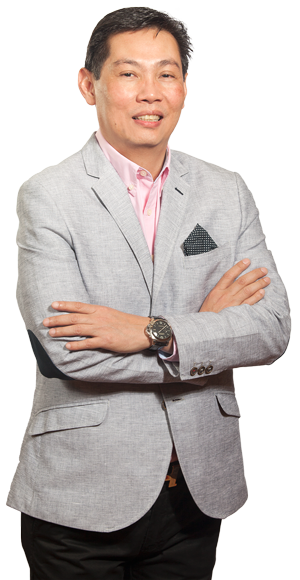 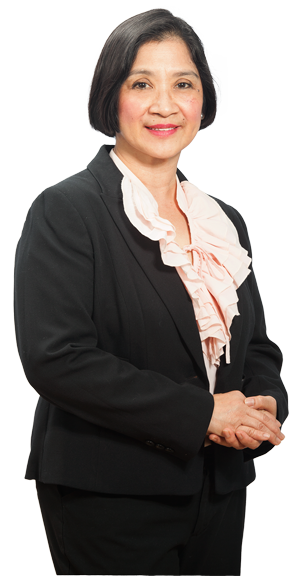 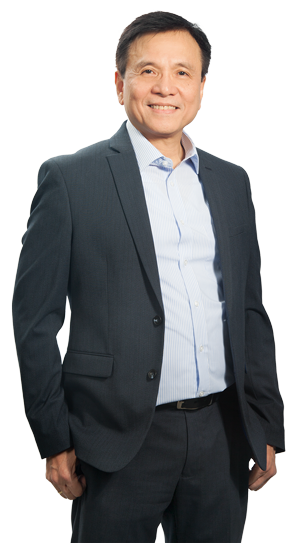 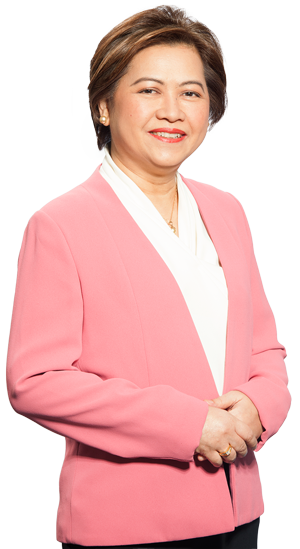 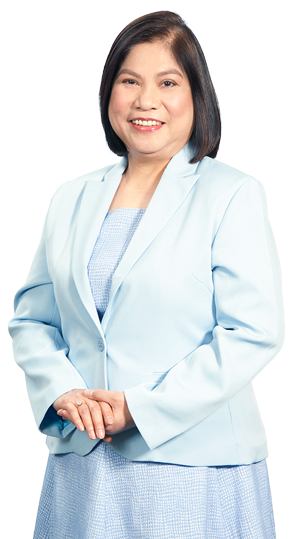 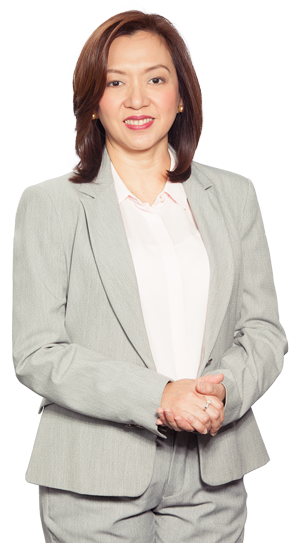 Executive Chairman of the Board

Nina sits as the Chairman of the Board of the following Insular Life subsidiaries: Insular Health Care, Inc., Home Credit Mutual Building & Loan Association, Insular Life Management & Development Corporation (ILMADECO), Insular Life Property Holdings, Inc., Insular Investment Corporation, and the Insular Foundation, Inc. Apart from these roles in the Insular Group, she is also a Director of the following companies: Union Bank of the Philippines (a Publicly Listed Company) and Pilipinas Shell Petroleum Corporation (a Publicly Listed Company). She is on the Board of Philippine Life Insurance Association (PLIA).

Most recently, she was appointed member of the World Bank Group’s Advisory Council on Gender and Development to serve from 2018 to 2019. Prior to joining Insular Life, Nina held various Senior Management positions with multinational financial institutions across Asia and the United States. She was a former Director, President and CEO of the Philippine Bank of Communications (PBCOM). She was also a former Director of MAPFRE INSULAR. Before that, she was a Managing Director and Head of Private Bank - Asia Pacific and Managing Director and Retail Banking Head- Asia Pacific of the Australia and New Zealand (ANZ) Banking Group, Ltd. (ANZ Group). Prior to her ANZ stint, she also held various critical management positions under the Citibank Group, namely, as Managing Director and Head of Corporate Center Compliance In New York; as Country Business Manager of Global Consumer Group in the Philippines; as Regional Head of Audit and Risk in Asia Pacific; and as Regional Head, Quality and Re-Engineering of Asia Pacific. She is a recipient of the 2013 Filipina Women Network (FWN) 100 Most Influential Filipina Women Leaders in the World™.

Nina received her Bachelor of Science degree in Commerce, major in Accounting, from the University of Santo Tomas. She is a Certified Public Accountant.

Louie is an Independent, Non-executive Trustee of the Company. He is the Chairman of the following Board Committees: Audit and Risk Management, Nominations, and Related Party Transactions. He is also the Vice-Chairman of Governance Committee. He is 70 years old and a Filipino citizen.

Louie is an Independent Director of ISM Communications Corporation (Publicly Listed Company) and Banco Rodriguez. He was a former Vice Chairman, Senior Partner and Head of Audit Division of Sycip, Gorres, Velayo and Company (SGV and Co).

In 2017, Louie attended an Advanced Corporate Governance Training Program by the Institute of Corporate Directors (ICD) in Metro Manila, Philippines.

Lisa is an Executive Trustee and is the President and Chief Executive Officer (CEO) of the Company effective 01 January 2018. As the CEO, she is also the Chairman of the Board’s Executive Committee. She is 60 years old and is a Filipino citizen.

Lisa sits in the Board of the following : Chairman of ILAC General Insurance Agency, Inc. and Insular Life Employees’ Retirement Fund; Vice-Chairman of Insular Health Care, Inc., Home Credit Mutual Building & Loan Association, Insular Life Property Holdings, Inc., Insular Foundation, Inc. and Insular Life Management & Development Corporation (ILMADECO); and member of the Board of Insular Investment Corporation. She is also a Trustee Outside of the Insular Life Group, she is a Director of MAPFRE INSULAR Insurance Corporation and Pilipinas Shell Petroleum Corporation (a Publicly Listed Company). She is a recipient of the 2016 Filipina Women Network’s (FWN’s) 100 Most Influential Filipina Women Leaders in the World ™. She is also a University of the Philippines Alumni Association (UPAA) Distinguished Alumni Awardee in Financial Management Excellence.

Gil is an Independent, Non-executive Trustee of the Company. He is the Chairman of the Information and Technology Committee and the Vice Chairman of Audit and Risk Management and Nominations Board Committees. He is 58 years old and a Filipino citizen.

Gil is Globe Telecom’s Chief Technology and Information Officer (CTIO) and Chief Strategy Officer (CSO). He is the Chief Executive Officer (CEO) of Globe Capital Venture Holdings and holds directorships in a number of subsidiaries and affiliates under Globe. He is also a Managing Director at Ayala Corporation (a Publicly Listed Company). He previously worked with Citibank in the Philippines, Singapore, Japan and Hong Kong, with functions on financial control, risk management, product development, and audit and market risk management. He also served in a variety of industry associations. His past affiliations include being Vice Chairman and Chairman of the GSM Association Asia Pacific (GSMA AP); member of the Advisory Board for Mobile World Capital Barcelona; member of the Board of Trustees of the IT and Business Process Association of the Philippines (iBPAP).

Mayette is a Non-executive Trustee of the Company. She is a member of the following Board Committees: Audit and Risk Management and Information and Technology. She is 64 years old and a Filipino citizen.

She obtained her Bachelor of Science degree in Mathematics from the University of Santo Tomas. She holds a Master’s degree in Business Administration from De La Salle University and is a candidate for Master’s degree in Business Economics from University of Asia & the Pacific. She is also a graduate of Top Management Program of the Asian Institute of Management. She is a Registered Financial Consultant (RFC) and Registered Estate Planner of the International Association of Registered Financial Consultants (IARFC). She is a Fellow of Life Management Institute of Life Office Management Association (LOMA).

In 2017, Mayette attended an Advanced Corporate Governance Training Program by the Institute of Corporate Directors (ICD) in Metro Manila, Philippines.

Vice-Chairman of the Board and Independent, Non-executive Trustee

Louie is a graduate of Bachelor of Science degree in Management at Ateneo de Manila University. He completed his Master’s degree in Business Management from De La Salle University. He also finished Course on General Insurance from the College of Insurance, Chartered Institute of London, United Kingdom.

In 2017, Louie attended an Advanced Corporate Governance Training Program by the Institute of Corporate Directors (ICD) in Metro Manila, Philippines.

Francis is an Independent, Non-executive Trustee of the Company. He currently sits as the Chairman of the Governance BoardCommittee and a member of the following Board Committees: Executive; Finance, Budget and Investment; and Related Party Transaction. He is 62 years old and a Filipino citizen.

Francis has received numerous awards and accolades during in his professional career. Among his most recent awards are: Commended External Counsel of the Year 2016 by In-House Community Counsels; Punong Gabay Award from the Philippine Council of Deans and Educators (PCDEB); Professorial Chair in Commercial Law from the Philippine Supreme Court, Philippine Judicial Academy and the Metrobank Foundation, Inc.;Advocacy Management and Shareholder Rights Advocacy Awards from BizNewsAsia;Certificate of Commendation from the Supreme Court of the Philippines; Outstanding Alumnus, San Jacinto Seminary and San Jacinto Seminary Alumni Association andCertificate of Appreciation from Capital Market Institute of the Philippines.

In 2017, Francis attended an Annual Corporate Governance Training Program by the Institute of Corporate Directors (ICD) in Metro Manila, Philippines.

Tito is a Non-executive Trustee of the Company. He is a member of the following Board Committees: Executive and Finance, Budget and Investment. He is 60 years old and is a Filipino citizen.

Tito is the Chairman of the Board of Union Bank of the Philippines or UBP (a Publicly Listed Company). He is also the Chairman of Union Properties, Inc. and Philippine Payments Management Inc. (PPMI) and a Director of Aboitiz Equity Ventures (a Publicly Listed Company). Prior to joining UBP, he was with Citibank as Managing Partner for Global Finance and Country Executive for Investment Banking.

Close
Close
INSULAR LIFE uses third-party services to monitor and analyze web traffic data for us. These services use temporary cookies during user sessions which are automatically deleted after session termination. Data generated is not shared with any other party. For more info, please see our Privacy Policy