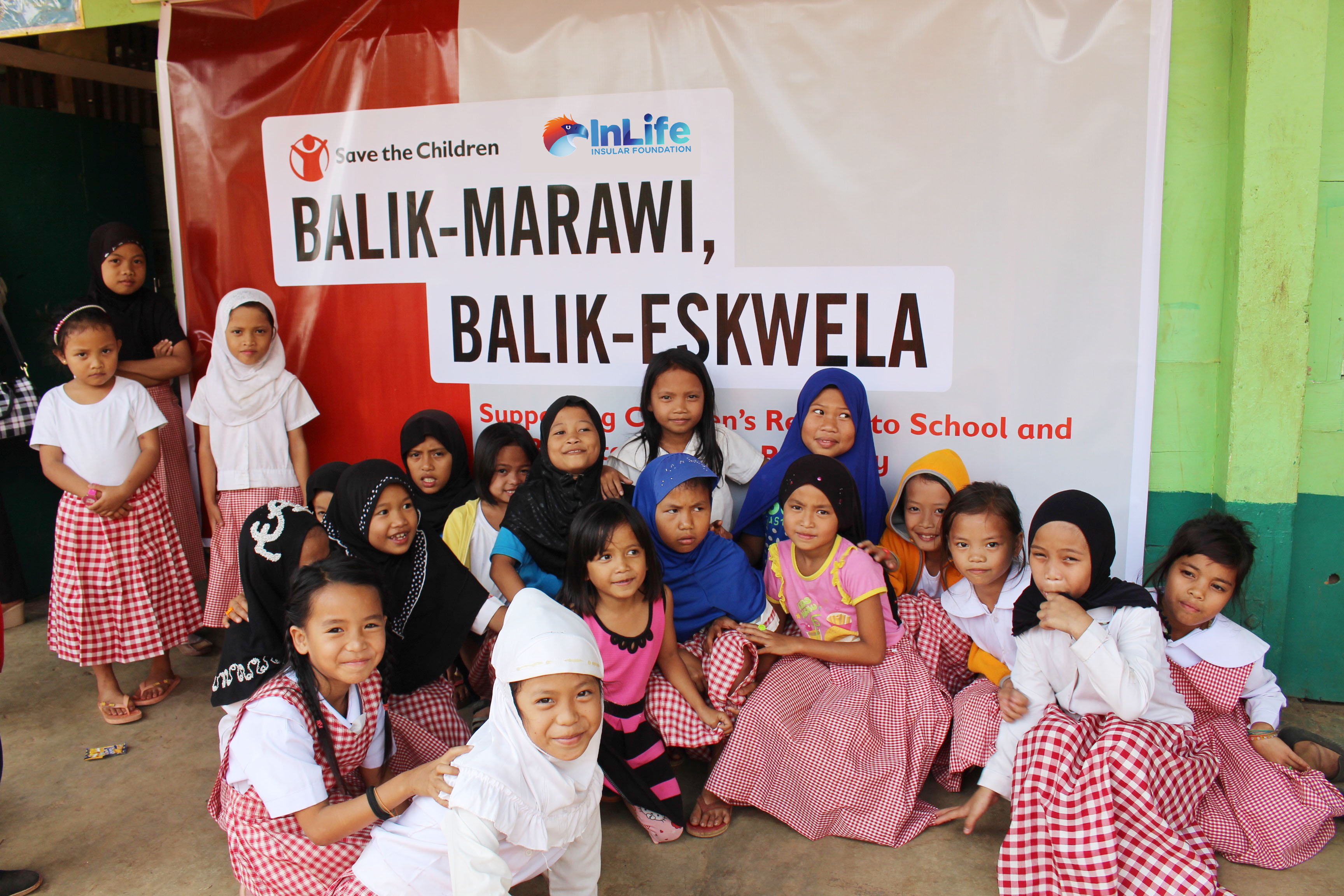 Insular Foundation and Save the Children Philippines recently distributed learning kits and school materials under the  “Balik Marawi, Balik Eskwela” project.
The project aims to help the displaced children of Marawi, as thousands still live in tents and miss schooling due to the lingering impact of the battle. Slightly more than a year since the Marawi siege, 28,856 out of the 62,000 displaced learners have not been tracked and are assumed to have enrolled in other places in the region.
Insular Foundation, Inc. Executive Director Ana Maria R. Soriano said the “Balik Marawi, Balik Eskwela” project seeks to support children’s return to school, paving the road for Marawi’s recovery.
“We are helping Marawi anew through this project with the hope that basic education is kept unhampered and accessible,” said Soriano.
This year’s donation is a follow-up to last year’s initial donation where Insular Foundation provided both education support through the “Balik Marawi, Balik Eskwela” project, and assistance to Marawi soldiers.
With the sudden rise of enrollees in the less affected schools, facilities, supplies and fixtures might not be adequate for both old and new students. The project will address the immediate education needs of school-aged children who have returned to Marawi City after the Marawi siege, including those who are still displaced and attending schools in Lanao del Sur.
The beneficiaries of “Balik Marawi, Balik Eskwela” project include ten day care centers and six elementary schools in Marawi, three schools in Saguiaran, Lanao del Sur, and one primary school in Matungao, Lanao del Norte. Meanwhile, the learning and teaching materials recently distributed include 10 Early Childhood Care and Development (ECCD) kits, 20 teacher’s kits, 20 teacher’s tables, 20 teacher’s chairs, and 850 student arm chairs.
“We know that there is still much to be done in Marawi, and this assistance may not be much in terms of scale, but we sincerely hope that even if this project only benefits 1,000 school children, we would have saved 1,000 children off the streets immediately, and paved the way for them to go back to school where they belong,” said Soriano.
A total of 77,170 families or 353,921 persons from Marawi fled to nearby towns including Iligan City, Cagayan de Oro, Lanao del Sur, and Lanao del Norte due to the onslaught of war between government forces and Islamic rebels, forcing them to stay in overcrowded camps or relatives in different areas.
Save the Children Philippines Chief Executive Officer Albert Muyot said the effect of war on children is far worse than on adults because they are physically weaker.
Muyot said children are also manipulated and later used as combatants, while schools are used as training ground and for military purposes.
“The consequences of conflict both disrupt and end childhood as children either die in gun battles or miss out on school, suffer hunger and sickness, thus losing their chance for a better future,” said Muyot.
The breakdown of essential public services such as health care, water supply and sanitation also result in diseases, hunger and insecurity among nursing mothers and children.

At least 24 out of the 96 barangays in Marawi City are severely affected. Save the Children Philippines estimates that 62,000 learners have been missing out on school since then. Its efforts for Marawi has so far reached 21,518 learners following the distribution of Temporary Learning Spaces and back to school kits to displaced learners. 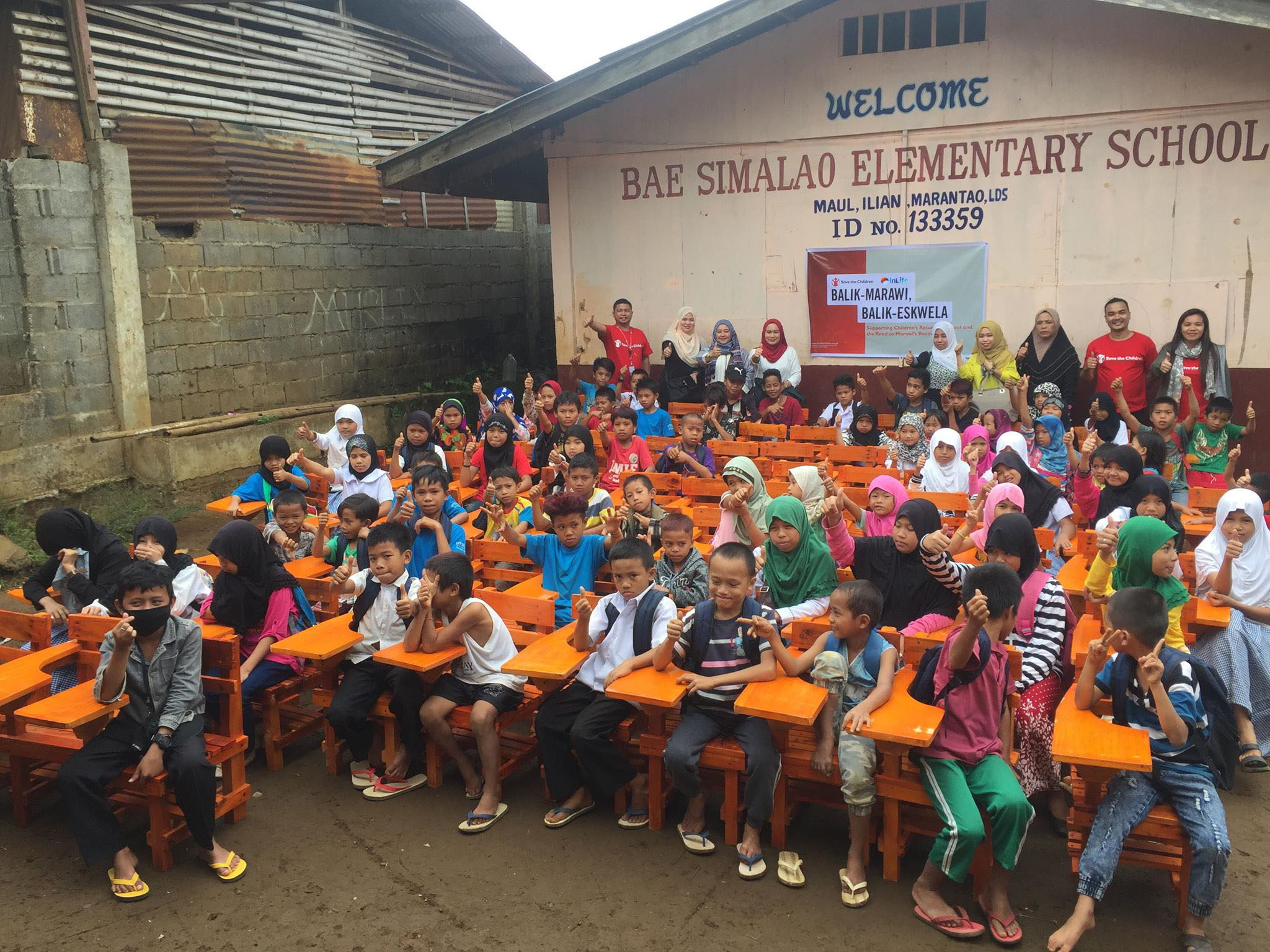 Thumbs up for school and recovery. Children, teachers and parents give the thumbs up sign to symbolize the road to recovery of the children displaced by the five-month long Marawi siege  that started on May 23, 2017, causing damage to property, disruption, loss of livelihood, and deaths.